The southern state of Tamil Nadu, a prominent name among the 29 states of the Republic of India, feature a highly modernized, substantially structured, well designed transport infrastructure with an effective transportation system, including both public and private transportation services. 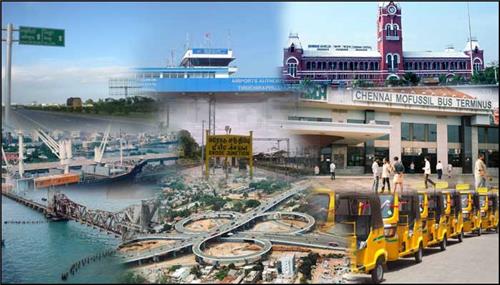 Being the cultural hot seat of India and a renowned tourist destination, Tamil Nadu impresses the local, national and international visitors alike with its first-class transportation services. The metropolitan city of Chennai is the capital city of Tamil Nadu that is known for its excellent road, rail and air connectivity to the rest of the parts of the country and several international destinations as well. Let's find out more about the transportation services in Tamil Nadu.

Tamil Nadu is one of the states in the country to feature excellent network of roads. The road network in the state extends about 153 km per 100 sq km area, which is more eminent than the nation's mean road network coverage of 103 km per 100 sq km area. An exclusive highways department for the state of Tamil Nadu was founded during the year 1946 as a subsection to Public Works Department. Subsequently, the department has been named again as Highways and Minor Ports Department (HMPD) on 30th October 2008. 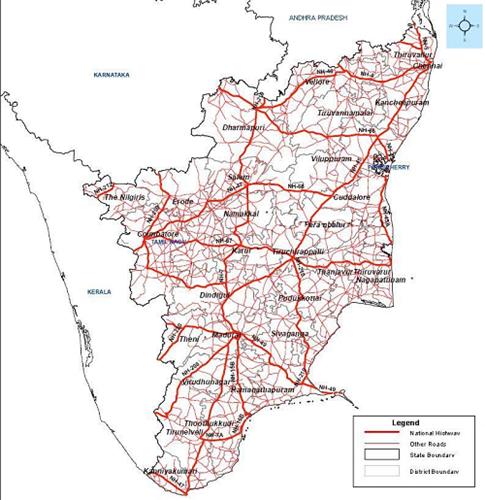 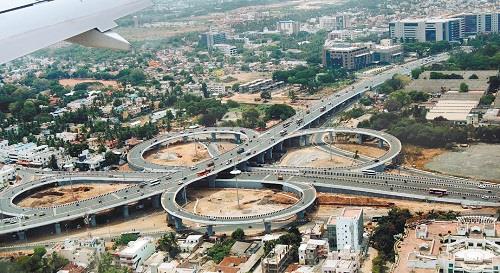 The national highways in Tamil Nadu connect important seaports, important urban centers of the state, significant manufacturing hubs and tourist spots. As of 30th March 2010, Tamil Nadu's road network has a total road distance of 1,23,678 miles. The southern state has about 8,858.89 miles of highways network, which include state highways and national highways on the basis of traffic intensity level and connectivity. Find below the assorted types of roads and their distances are given below: 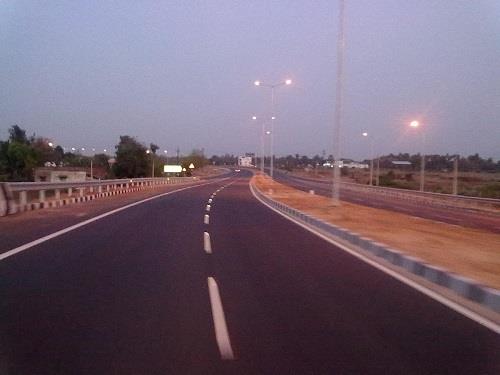 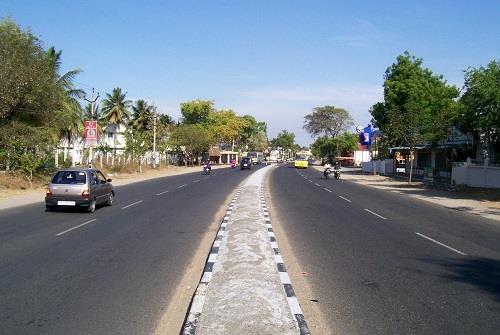 Construction and Maintenance wing of the Highways and Minor Ports Department (HMPD) in Tamil Nadu manages laying and upkeep of the Major District Roads (MDR), State Highways aka SH and Other District Roads (ODR). It is important to mention that the state highways network in the southern state of Tamil Nadu has seven circles viz. Tamil Nadu, Chennai, Tiruchirappalli, Coimbatore, Madurai, Salem and Tirunelveli. Find below some of the important state highways of Tamil Nadu:

The following are state highways with urban stretches: 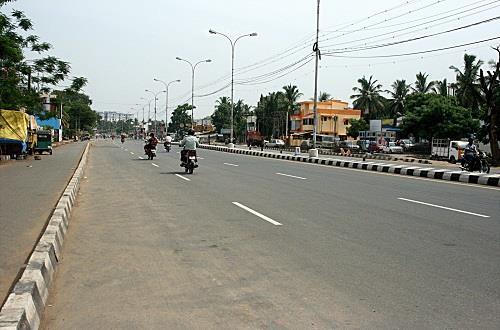 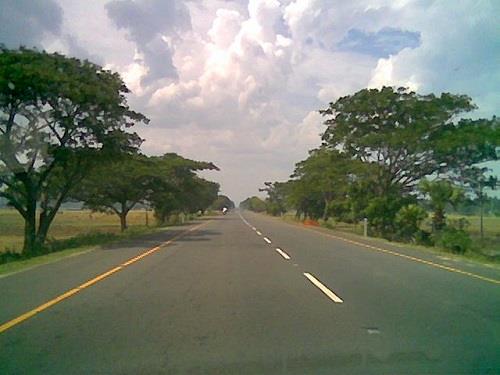 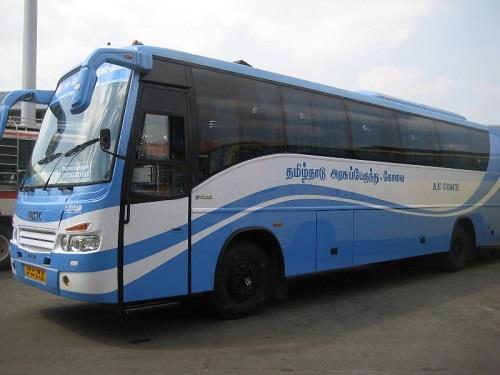 TNSTC plies a wide range of buses for inter and intra bus routes and city routes as well. Furthermore, the Tamil Nadu State Transport Corporation is divided into nine transport divisions which include

The public bus transporter has 294 bus depots and five workshops. It also extends rental and tourist services to various destinations. Every TNSTC bus in the state exhibits a portrayal of Tamil poet and philosopher Thiruvalluvar and a Thirukkural inside the bus.

Formerly called as Thiruvalluvar Transport Corporation, the SETC is a Public Sector Corporation that functions under the Ministry of Transport of the State (Government of Tamil Nadu) that operates long distance bus services (exceeding 300 km and above) all over Tamil Nadu and important urban centres in bordering states. 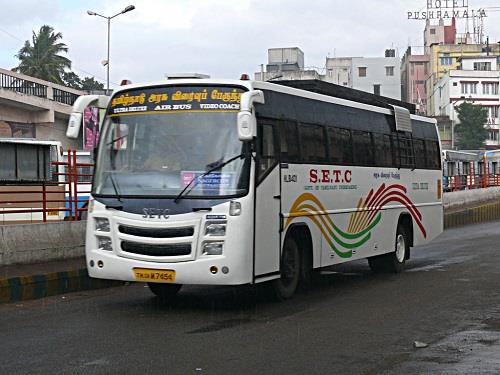 The State Express Transport Corporation plies three classes of bus services that include Air conditioned buses, Ultra deluxe buses and deluxe buses. SETC offers reservation and advance booking facilities for all its buses. The advance reservation for SETC buses commences one month before the travel date. Bookings can be done SETC reservation counters or online.

In an attempt to help the population of unserviceable and inadequately served areas in Tamil Nadu, the Government of Tamil Nadu launched an impressive 'Mini-bus Services Scheme' which is to be operated primarily by private players. 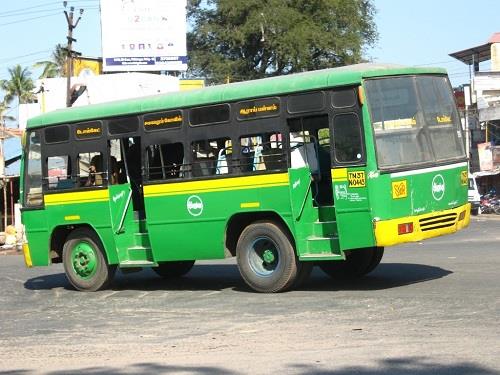 During the year 1999, the scheme is altered by the government, which enables mini buses to extend their service for a total distance of 20 km, with an overlapping distance of 4 km along the served areas. At present, there are 3,959 mini buses plying along the rural, semi-urban and urban areas of Tamil Nadu. 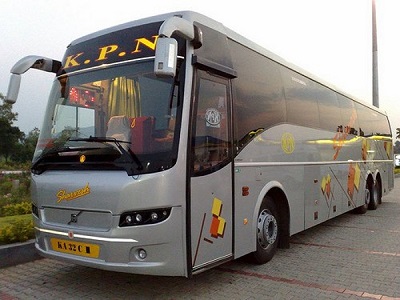 Owing to the fact that city buses are crowded during peak hours, Tamil Nadu has become a dream destination for private call taxi operators. During the past 3 three years, the southern state has witnessed several call taxi services launching their operations across the important cities of Tamil Nadu. Some of the popular call taxi services in Tamil Nadu include Taxiforsure, Friends cabs, Fast track call taxi, NTL call taxi, OLA cabs, Orange call taxi and so on. 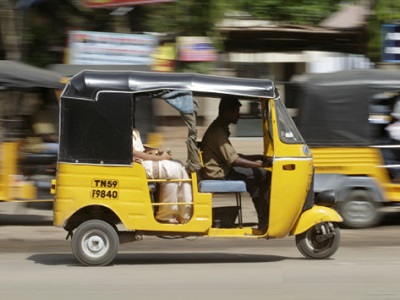 Auto rickshaws are considered as a paratransit transportation system that is one of the easily accessible transport options in the state. Auto rickshaws remain uncomparable in their transport segment of offering house-to-house transportation system and last-mile connectivity at a low-priced travel to a majority of the Tamil population. Despite the abundant services of government buses, private buses, call taxis and trains, connectivity continues to be an unsolved problem across the urban centers of Tamil Nadu. 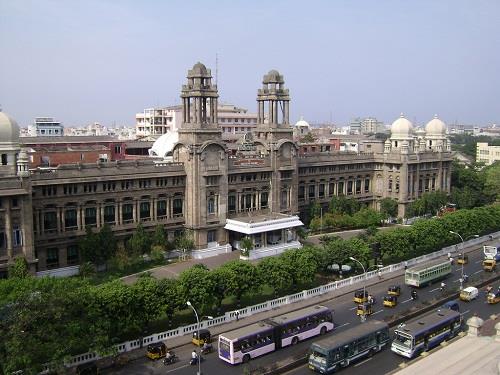 It is recorded that more than 500 million passengers use Southern Railways annually. Furthermore, for the purpose of better administration, the Southern Railway is divided into six railway divisions, each headed by a Divisional Railway Manager. Among the six divisions of the Southern Railway, four divisions are located in Tamil Nadu and they are Chennai, Madurai, Salem and Tiruchirappalli. 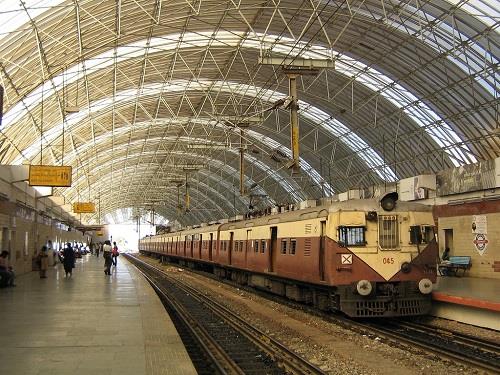 A metropolitan elevated railway line controlled by the Southern Railway, Mass Rapid Transit System is regarded as the first elevated railway line in the country. MRTS Chennai line presently stretches from Chennai Beach to Velachery, extending a distance of 15.53 miles km with 21 stations.

Note: The much-aniticipted Chennai Metreo, yet another rapid transport project in Chennai is under construction and is expected to be on track by the fiscal year of 2014-2015.

Formerly known as Madras Port, the Chennai Port is regarded as the second largest seaport and third oldest seaport in the country. Established almost 133 year ago, Chennai Port is an all-weather port with wet docks that provides access to ships and boats. The Chennai Port is one of the important factors contributing to the economic growth of the state. Besides, the major port is the principal reason for Chennai being called as the 'Gateway of South India'. 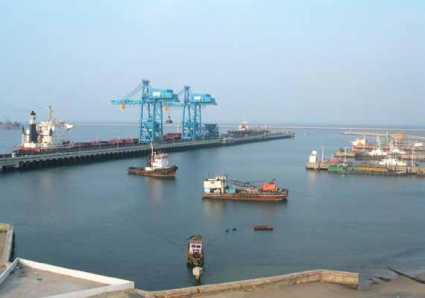 Popularly called as Ennore Port and officially called as Kamarajar Port Limited, this seaport is situated on the Coromandel Coast, just 24 km away from the Chennai Port. Ranked 12th among the major ports of India, the Ennore Port is the first port in the country to be declared as a public company. Licensed in 2001 and functioning on a landlord port concept, the Ennore Port is obtaining operations and maintenance services from outside suppliers on a contract basis. By the year 2016, the Ennore Port is anticipated to have the facilities to manage over 80 million tons of shipment. 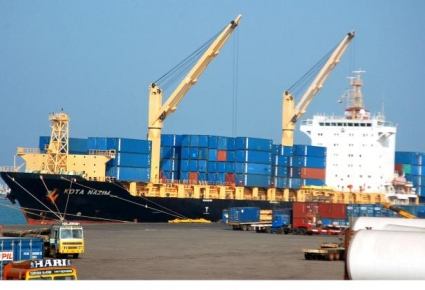 Widely known as Tuticorin Port and officially named as V.O.Chidambaranar Port is one among the 12 major seaports of India. Touted as the second most prominent in the southern state of Tamil Nadu, V.O.Chidambaranar Port is the third international port of the state. The port deals with both containers and cruise liners. Apart from the container terminals, the Tuticorin Port also houses a passenger terminal for cruise liners. It is significant that the V.O.Chidambaranar Port presently manages seven per cent of the total container traffic in the country. Furthermore, the port is provided with facilities to handle watercrafts which are longer than 245 m.

Quick Facts:
UN/LOCODE: INTUT
Owned and Operated by: V.O.Chidambaranar Port Trust, Ministry of Shipping, Government of India
Type of Harbor: Artificial medium-sized seaport
Size of HArbor: 960 acres
Cargos Handled: Coal, Building materials, Sugar, Rock phosphate, Petroleum products, Oils, Ore and so on
Highlights: Due to its advantageous location in the southern peninsula, the V.O.Chidambaranar Port has the potentiality to be an international container transshipment hub in near future

Cuddalore Port is an anchorage seaport located at the meeting point of the rivers Paravanar and Uppanar along the Bay of Bengal. Vessels that carry freight drop anchor in the open sea and loading & unloading of freight happens with the help of flat bottom boats for carrying heavy loads. 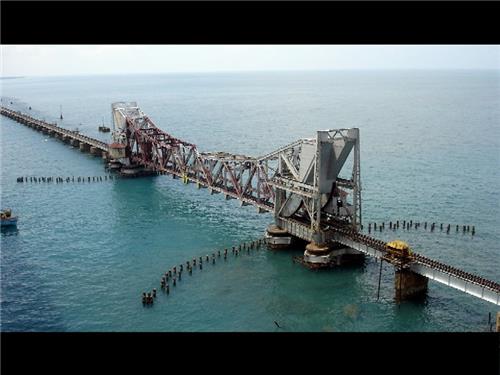 A historic port located in the district of Ramanathapuram in Tamil Nadu links east and west seacoast thru the Pamban Pass. Small vessels, flatboats, fishing boats navigate through the Pamban channel by opening the Pamban Rail Bridge by railway officers.

Situated on the south most tip of mainland India, the Kanyakumari Port links Vivekananda Rock and the massive Thiruvalluvar Statue. The ferry service to Thiruvalluvar statue and Rock memorial is operated by the Poompuhar Shipping Corporation Limited.

Some of the other important Government Ports in Tamil Nadu include Nagapattinam Port, Valinokkam Port, Rameswaram Port and Colachel Port.

Captive Ports are built and modernized by commercial enterprises, who establish industries that demand port installations. Some of the popular Captive Ports in Tamil Nadu include Kattupalli Port, Thiruchopuram Port, Kaveri Port, Punnakkayal Port, Thirukkadaiyur Port and so on.

Tamil Nadu features excellent air connectivity to many national and international destinations. The southern state is the home of the Chennai International Airport, which is regarded as the third busiest airport in the country. The Chennai airport is also considered as the second largest cargo hub in India, next only to Mumbai. Amplified commercial activities in the state have brought about an increase in passenger traffic and cargo movement which has been flourishing at over 18 % annually. 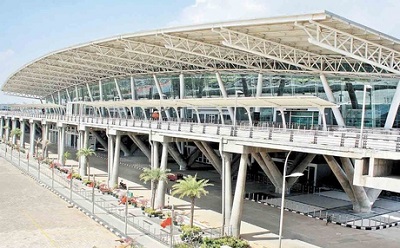 The third busiest airport in India, Chennai airport is the first airport in the country to house domestic and international terminals adjacent to one another.


Did you Know?
Chennai airport is the first international airport in India to obtain ISO 9001-2000 certification. 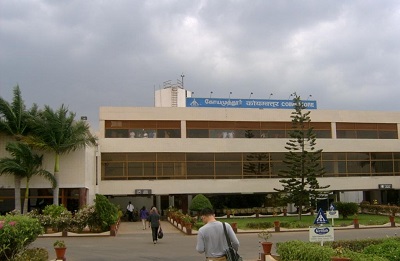 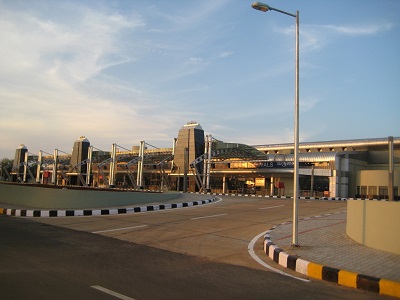 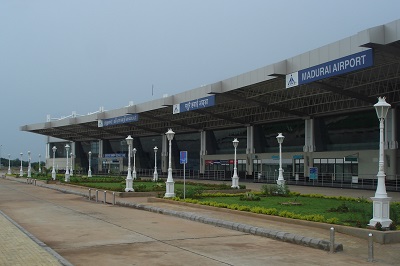 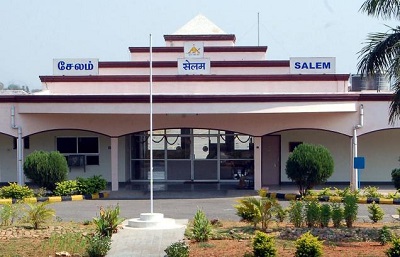 Located just 15 km away from the city center of Salem, Salem Airport is the primary domestic airport serving Salem, Krishnagiri and Dharmapuri. 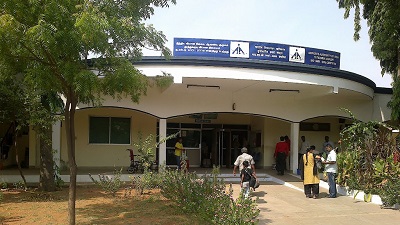 A domestic airport situated just 17 km away from the city center of Thoothukudi; Tuticorin Airport is the primary airport serving Tuticorin and Tirunelveli.